After dedicating most of our interrail trip to visiting the biggest cities in Eastern Europe, we’d grown a little weary of city life by the time we’d reached Budapest and enjoyed its exciting nightlife.

Budapest was the halfway point of our 27 day trip and we hadn’t booked anywhere to stay after it. So the day before we were due to leave we headed to Keleti station to plan our next move. Megan consulted the interrail map and suggested two options, first we go to Bucharest as we had originally thought of visiting or we could try Brasov. I can’t remember exactly how the decision was made to go to Brasov, but we made our reservation for an overnight train for the next day, and left the station feeling excited.

The next day we checked out of Carpe Noctem Vitae and headed to Lidl and Subway to prepare for our 13 hour train journey. We found the train, sat down, and awaited departure….until a couple of travellers arrived and told us that we were in their seats.

It then transpired that the reservation we had made for the overnight train was for the night we’d booked the ticket. Panic ensued as we got off the train and went to find a guard to plead with. Megan ran to get extra money to pay whatever we may get charged to get on the train, whilst I stood with the guard hoping the train wouldn’t leave. Megan returned and we were allowed on the train after paying for what we thought was a ticket to Brasov, the guard was apathetic and handed us what looked like a receipt for the ticket.

The train departed and we sat in our seats recovering from the panic hoping we wouldn’t get into any trouble and sat across the aisle from one another we were able to relax, passing time writing our travel journals. The journey was relatively smooth and comfortable, until we crossed the border and a new guard came through to check our tickets. We showed the guard the receipt along with our interrail passes and told her we were going to Brasov, she looked at the receipt and said ‘this is not a ticket to Brasov.’ She made us move seats, weirdly only a few down from where we’d originally been told to sit when we got on the train, and went and checked the rest of the train. On her return she sat across the aisle from us and sat there for the remainder of the journey. When the train arrived at Brasov, the guard told us we had arrived and we were allowed off the train with no further problems.

After a chaotic journey it was a relief to get off the the train in Brasov, though I think we still felt a bit apprehensive walking through the station. We’d decided to stay at Kismet Dao Hostel, and to get there we needed to take two short bus trips. My first impression of Brasov was pleasant, as when we were buying bus tickets, I had somehow managed to get a 1 leu note, but Megan didn’t have one. A Romanian man handed Megan 1 leu, which was such a kind gesture and meant we could get on our way.

Kismet Dao is set in a residential area of Brasov, about a 5-10 minute walk away from the old town. We arrived a bit bedraggled after our chaotic journey and were pleasantly surprised that we were able to check into our dorm on arrival, the lady behind the desk was funny when we told her we were visiting Bucharest next she told us she didn’t like Bucharest, offering no explanation than ‘ugh Bucharest’. We headed up the rainbow staircase to our dorm, the hostel is in an old building, with creaking wooden floorboards and wooden cupboards in the dorms to store bags. I liked that on every wall and door there seemed to be a positive mantra, it seemed that Brasov was the place to go to get away from it all, and after the excitement of Budapest this was exactly what I needed. 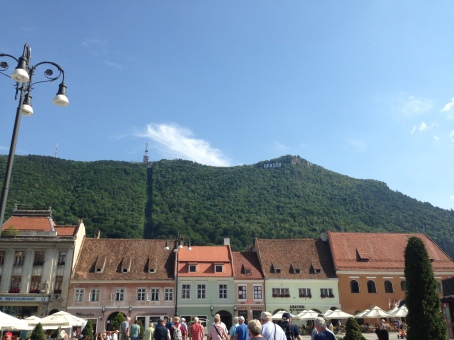 After settling in our dorm we decided to head out and explore Brasov, we found the nearest mini-market, passed a load of little bakeries selling pastries and wandered into the old town. We got a gelato and sat in the brilliant sunshine in the main square, then we walked around the town, passing the church and Brasov’s first school, before heading back to the hostel for dinner. 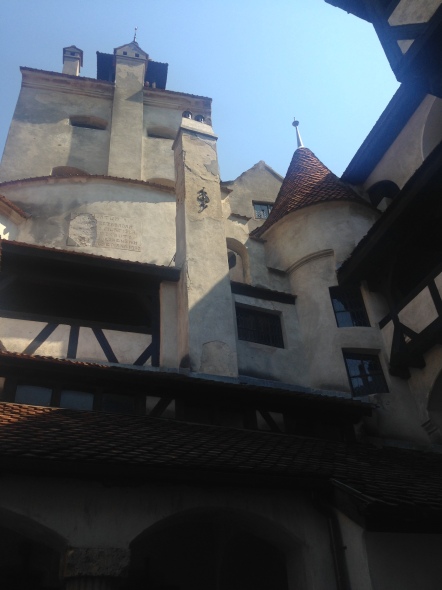 The next day we decided to go on a day trip to Bran Castle and Rasnov, as the evening before we had met two Australian girls who were planning on going there. It was pretty easy to get to Bran Castle, we took a bus to a bus station and from there we were able to get another bus which stopped at Bran and Rasnov meaning we could visit one after the other. We spent a lovely day exploring the Transylvania region, Bran Castle of course inspired Bram Stoker’s Dracula, it was a beautiful medieval building with lots of twists and turns and narrow stairs and corridors. As museums go it was really nicely laid out, despite the information boards calling Stoker an Irish writer on one and then British on the other, which I’m sure no Irishman would appreciate being called! The rooms were filled with medieval furniture, but it was also housing a fashion exhibition at the same time, with mannequins showing off medieval style dresses in each room. I know this is a common occurrence in museums, and I appreciate that it’s just trying to advertise local designers, but personally I like history and fashion kept separate. After a quick lunch we hopped on the bus to get to Rasnov,  and walked to the medieval fortress which offered stunning views of the Transylvania region. Even in the August sunshine the vast pine-wood forest against the backdrop of moody mountains was a sight to behold.

Then we went back to the hostel, and made our way out for the Brasov Free Walking Tour. Walking tours had been a highlight of our trip, we’d taken one in Warsaw and I also went on a food tour in Krakow, the one in Brasov was exactly the same format. We were guided around Brasov by the lovely Simona who asked us questions, and if we got them right she gave us a lolly, I won quite a few lollies and was named queen of the tour. We walked around the whole of Brasov, visiting the narrowest street in Europe, and then to where the last public execution occurred during the Cold War. The tour ended up near a windmill which faced Mt Tampa and the Brasov sign, which had been installed by students as an art piece and then locals petitioned for it to remain a permanent fixture. We got to look over the town as the sunset, and finished with a group photo. It was a really lovely tour and our tour guide was absolutely brilliant. Though she did tell us that she had had some British tourists on the tour before who had said ‘Aren’t you meant to be in England taking our jobs?’ The Brits sure do like making a good impression overseas…. *groans*

When the tour was over I went out for dinner with a few of the girls who were staying at our hostel, I tried a sheep’s milk and tomato pie which was lovely, and enjoyed having conversations about nationalism in France, Australia and England. 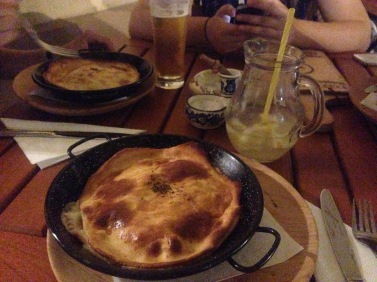 Our final day in Brasov was spent taking a cable car up Mount Tampa and looking over the town, this was by far the highlight of our visit to Brasov. It was such a beautiful day, and the view from the top was incredible, if I ever have the chance I’d like to go back and actually walk to the top of Mount Tampa. After that we went back to the hostel where I spent our last hour in Brasov laying in the hammock in the garden, feeling very thankful for having visited Brasov and completely in awe of its beauty.

I can’t put my finger on what it was about the place that made me love it so, perhaps the fact we decided to go there last minute and it just exceeded our expectations.  It was my favourite stop on our interrail trip and to this day is the first place I’ll recommend to anyone who says they want to go travelling around Europe, so if you’re planning a trip around Eastern Europe I’d say Brasov is a must. Though Brasov might not seem like much when you first get there, it has so much to offer, and has a certain integrity of a place with a rich history that can stand up for itself.

Have you been to Romania or are you thinking of going? Let me know your experiences below, or if you found this helpful.

3 thoughts on “Brașov – the sleepy town that stole my heart”

First day back at @uva_amsterdam! I can't believe I'm about to start the final part of my Masters! • My colleagues and I took part in the @rijksmuseum escape room, you get to be "interns" at the museum, quite fun but a little too meta for us 😉• Sorry to say that I preferred the shadow initiation at @southaustralianmuseum
🖤💛❤️
Just had my farewell dinner with all the friends I made and worked with in Adelaide. Thankful you all for the thoughtful gifts, especially Jade and Jacinta for their annotated copy of the Australian Aboriginal Cultures Gallery, wrapped in bubble wrap, acid free paper and tyvec! I'm so sad to be leaving but so thankful for such a special night!
#TwoBlakWomenandsomeguy. I still find myself thinking about Jade and Jacinta telling the truth about what it's like to be an Indigenous person working in a museum to everyone at the AMaGA National Conference. I am so thankful I met these two incredible women.
A few months ago I was helping my supervisor with a collections survey to determine how many objects in the museum collection were representative of every migrant community in South Australia. The importance of this work was highlighted when the three communities for this year's Travelling Table was announced. We had just enough objects from Sri Lanka, Vietnam and the Philippines to fill a display case. From layout to final display it was a challenge to figure out how to represent these communities with objects, but I think we got there in the end.
Thank you so much to everyone involved in Daring to be Different, I questioned everything I thought I knew about gender and sexuality and together we created a place where stories of courage, identity and sexuality could be told.

An Historian About Town

History in the Making

Don't Eat the Pickles & Other Stories

Photos and stories that are innately Kait

"Everything happens for a reason!"

Building bridges between Kingdoms one step at a time